Summer season is in high gear, and this week we will be celebrating with the feast of Saint Thibault (barbecued meats and French wines). The question comes up often: what are the best wines for barbecued fare?

It’s a broad question, and has a multitude of answers. Let’s start with some definitions, talk about varietals and styles, and end with one of our favorite styles of wine.

BARBECUE
As you probably know, barbecue, by definition, is cooking with offset heat (as opposed to direct heat) and often over plenty of time, patiently rendering the fat in tougher cuts of meat into succulent goodness (so note that this post is entirely about barbecue and not about grilling, which will be a future post). Another way to salivate over the definition of barbecue is to read how 16 different champion pitmasters define the term.

Pork shoulder, pork ribs (both spareribs and babyback), and beef brisket are the meats that most often fall into this category. Wood smoke is involved, especially in the early stages of cooking, to really impart the aroma and taste of the fire. This wood smoke build can make for intense flavors in the meat that are rich and long-lasting on the palate. Combine this heavy use of smoke with the common use of barbecue sauce (usually vinegar based and occasionally spicy) and you have a combination that can destroy the flavor of many wines, so you have to pick carefully.

VARIETALS AND STYLES OF WINES
Because of the intensity of flavors in most barbeque, delicate wines such as Pinot Noir are out. They would end up being the proverbial weakling on the beach getting sand kicked in their face. Also on the list of what not to pour are lower-acid varietals, namely many American Merlots and some Australian reds. If you serve a lower acid wine with a high acid dish (acidity in this case coming from the sauce) you make the wine taste flabby and the food taste too sharp. (For the ultimate example of this, have an inexpensive low acid merlot from California with red sauce pasta.)

What you should look for with barbecue are fuller bodied red wines that have a firm grip of acidity, which will help balance against the potential acidity of the sauce. 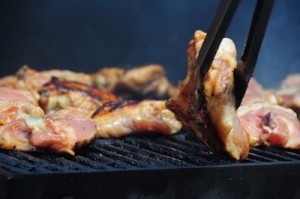 SAFE (AND COMMON) CHOICES WITH BARBECUE
There a number of ‘go-to’ varieties for classic pork and beef barbecue. One of the most common (for good reason) is the all American Zinfandel, which often brings a peppery spice with waves of black cherry and plum aromas … perfect for ribs and brisket. Zinfandel often clocks in with slightly higher alcohol that most wines (the grapes have a tendency to produce more sugars than say, Pinot Noir, resulting in higher ABV), and this actually helps to amplify the boldness and richness of the food with the drink. Favorites around the office of course include Ridge Vineyards and Chateau Montelena (who is best known for Cabernet, but make a stunning Napa Valley Zinfandel as well).

Another common selection is Malbec from Argentina, though in this case you have to be careful. Many pick Malbec because Argentina’s meat culture leads them to think it’s a perfect combo for any outdoor cooked meats, but the Argentine barbecue style is far different from America. Additionally, there is a wave of sub-par Malbecs flooding the U.S. market right now trying to ride the wave of popularity. These young-vine wines are surprisingly thin and one-dimentional. Best to stick with older vines that show the richness and power of Malbec, such as TintoNegro or Llama from Mendoza. 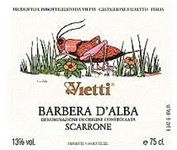 Another grape that is a barbecue superstar is Barbera from Piedmonte, Italy. High acid, low tannin (tannin makes spicy food taste unreasonably spicier), and core of deep black and red fruits. Called by many wine writers “Possibly the most food-friendly wine around” this is a perfect solution when cooking a wide variety of barbecue to be served at one sitting. Dozens of great producers are to be found, including the legendary Vietti, the under the radar Rizzi and Paitin, and the more modern style of Boroli.

UNDER THE RADAR CHOICES WITH BARBECUE
Why do what everybody else does? There is a world of varieties out there, and often times these hidden gems have some of the greatest bang for the buck. A few of our favorites: