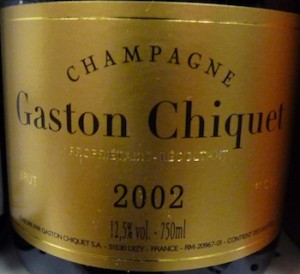 Vintage Champagne is a rarity, only about 10% of the total production of the region. On average the producers will declare about three out of every ten years. The producers themselves declare the vintage for the house, there is no “regional announcement” or vintage decree. This means that even on “off” vintages such as 2003 you might have a few houses that escaped the bad weather and produce a vintage product (such was the case for Moet & Chandon, which produced a 2003 Dom Perignon). This also means that in great vintages, such as 1996, you’ll have nearly every house produce vintage wine.

Larry Colbeck did some serious research on Champagne vintages, and we are happy to present the definitive guide to the vintages of Champagne, chock full of Larry’s personal spin.

2013 The initial analysis of the 2013 crop in Champagne is almost exactly the same as that of the legendary 1996 according to Henriot’s cellar master, Laurent Fresnet. He also reported that the Pinots were in the best shape after the difficult flowering; the Chardonnay has been rather badly affected by millerandage and so will see a smaller crop but of very high quality. Speculated to be ✮✮✮✮✩+ 2012

2009 Terry Theise states that the 2009 vintage wines are quite adamant and sometimes even heavy recalling the young `99s, another vintage marked by yellow-fruit and which seemed rather vulgar on first glance, but those young ducklings turned into graceful swans. They slimmed down, became sensuous and silky, and started showing class and inner gracefulness. ✮✮✮✩✩ keep

2008 All three varieties were successful, satisfyingly thick skins on the Pinots suggesting good flavour profiles. The wines promise an appealing balance of concentration and acidity. An extremely flowery vintage, lovable from the first instant. ✮✮✮✮✩ Keep

2005 I think there is just to many questions with this vintage to recommend comfortably. 2005 in Champagne was not as uniformly successful as in some other French regions. The NVs based on 2005 demonstrate that same forward charm and voluptuousness of fruit, and combined with the acidity of 2004, these champagnes are extremely compelling. Peter Liem speculates, “ I’m wondering if I will like 2005 as a blending year even more than as a vintage year, in fact.” Then there is the rotten potato thing. Yet one finds exceptions, wines of a certain gracefulness that absorbed their strength of fruit. ✮✮✮✮✩ Keep

1996 Up to this point 1996 has been considered a fantastic vintage which produced classic wines; the best since 1990. A long, dry summer produced grapes of record ripeness with record acidity. Some, including myself, question how the 1996s are aging. The wines are generally characterized by a distinctive rather lemony acidity and very good attack, but some wines now seem terribly austere, while others already seem dangerously short of fruit. None of the subsequent vintages are quite as distinctive as 1996, which in the more successful cases should almost certainly be drunk after the 1999s. ✮✮✮✮✮ Keep

1990 A superb year and one of the top half-dozen vintages of the last century. The champagnes display good body and marvellous depth of fruit as well as great finesse and very good longevity. The best will be drinking well for many years to come. ✮✮✮✮✮ Drink soon