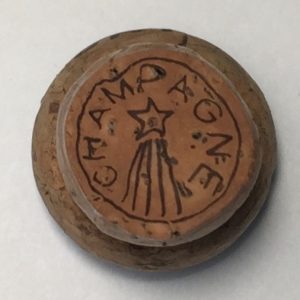 Vintages in Champagne are more important than in most other regions. At these northern limits of grape growing it is important to mind the varied conditions of each and every vintage. It was this that first inspired the blending that today is inextricable to winemaking across Champagne.

To balance the lean years with the perfectly ripe, most champagne is a blend of multiple vintages often marked NV for “non vintage” which fewer and fewer champenois are wont to use. Instead we increasingly hear this art described as “multi vintage”. Vintage champagne on the other hand remains a rarity.

Only 10% of the total production of the region becomes vintage champagne from a given year. On average the producers declare about three vintages in every decade. Instead of “regional announcements” or vintage decree, each producer declares the vintage for their house meaning that even “off” vintages such as 2003 might feature as a vintage wine for the few houses that escaped the bad weather to produce a vintage product. Such was the case for Moet & Chandon, which chose to produce a 2003 Dom Perignon. This also means that in great vintages, such as 1996, you’ll have nearly every house produce vintage wine.

Larry Colbeck did some serious research on Champagne vintages, and we are happy to present the definitive guide to the vintages of Champagne, chock full of Larry’s personal spin. This is an update of a 2013 article not only adding the recent vintages but reflecting on changes in how older vintages are drinking.

As one reads comments on the current vintage in Champagne it is Jean-Baptiste Lécaillon, cellar master at Roederer, that I find most revealing. M. Lécaillon has great familiarity with the vineyards and fruit with which he must work as, among the big houses, Roederer harvests an unparalleled proportion of the its own grapes. Close to my own enthusiasm for biodynamics, M. Lécaillon is moving to this type of farming in a growing number of his finest sites. He is adamant about the qualities this provides and credits the technique especially in difficult vintages.

2016 This may be the smallest harvest in France since 1945. Champagne was down 25 to 33 percent depending on the area. A very difficult vintage unlikely to produce much vintage wine.

2015 Yes, this is a warm vintage but, critically, the degree days accumulated over a longer period of time rather than in hot spurts. The vintage shows great promise and among wines predominately Pinot Noir there will be splendid bottlings. Peter Liem, on his marvelous ChampagneGuide.net, quoted Anselme Selosse about his impressions of 2015. He said, “If it hadn’t rained, it would be a mythical vintage, like ’28 or ’47. As it is, it’s merely an outstanding one.” Whoa!

2014 Seems to be a Jekel & Hyde vintage with vintners differing widely in their enthusiasm. In general, the pinot fruit fared well with the Chardonnay a bit weaker. The vin clair are reported to display a nice richness though being a bit hollow in some areas. Clearly we have to wait and see.

2013 The original post was based only the condition of the crop and early tasting of vin clair, the still base wine from which the Champagne will be made. There is a yin yang in Champagne in 2013, the south was reported by some vignerons as even better than 2012 while the northern wineries settled for good wines but not of grande année quality. Speculated to be ✮✮✮✮✩

2009 Terry Theise states that the 2009 vintage wines are quite adamant and sometimes even heavy recalling the young `99s, another vintage marked by yellow-fruit and which seemed rather vulgar on first glance, but those young ducklings turned into graceful swans. They slimmed down, became sensuous and silky, and started showing class and inner gracefulness. The Pinots, particularly noir, did quite well while Chardonnay struggled. ✮✮✮✩✩ keep

2008 All three varieties were successful, satisfyingly thick skins on the Pinots suggesting good flavour profiles. The wines promise an appealing balance of concentration and acidity. An extremely flowery vintage, lovable from the first instant. Expect to see these released after the 2009’s. ✮✮✮✮✩ Keep

2005 I think there is just too many questions with this vintage to recommend comfortably. 2005 in Champagne was not as uniformly successful as in some other French regions. The NVs based on 2005 demonstrate that same forward charm and voluptuousness of fruit, and combined with the acidity of 2004, these champagnes are extremely compelling. Peter Liem speculates, “ I’m wondering if I will like 2005 as a blending year even more than as a vintage year, in fact.” Yet one finds exceptions, wines of a certain gracefulness that absorbed their strength of fruit. ✮✮✮✮✩ Keep

1996 Up to this point 1996 has been considered a fantastic vintage which produced classic wines; the best since 1990. A long, dry summer produced grapes of record ripeness with record acidity. Some, including myself, question how the 1996s are aging. The wines are generally characterized by a distinctive rather lemony acidity and very good attack, but some wines now seem terribly austere, while others already seem dangerously short of fruit. ✮✮✮✮✮ Keep

1990 A superb year and one of the top half-dozen vintages of the last century. The champagnes display good body and marvelous depth of fruit as well as great finesse and very good longevity. The best will be drinking well for many years to come. (10/17)—I am experiencing more 90’s that have reached full maturity. I suggest you seek out recent tasting notes on the particular wines in your cellar. ✮✮✮✮✮ Drink soon