We are proud to announce The Wine Company as the Minnesota distributor for the legendary wines of Frog’s Leap of Napa Valley.

As you get to know the story and philosophy behind Frog’s Leap, you’ll understand why all involved consider this partnership a perfect fit for The Wine Company. Last month founder/winemaker John Williams, along with his VP/Director of Sales Jonah Beer, kicked off Frog’s Leap for the sales team, and conveyed the incredible background of the winery. We would like to share it with you. 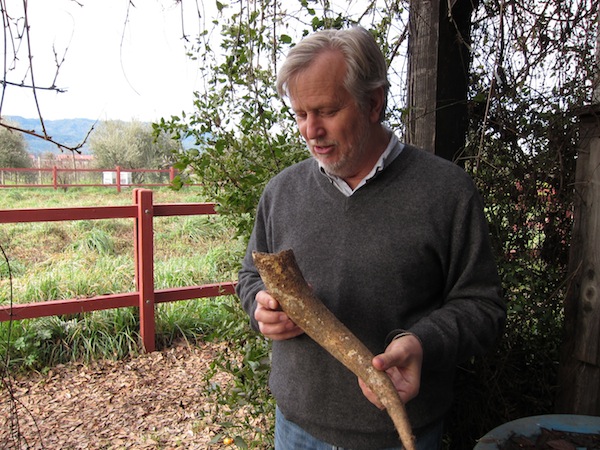 John Williams with a cow’s horn for Biodynamic preparations

As a student of farming at Cornell University in upstate New York, John Williams caught the viticulture and winemaking bug. Stints at various upstate New York wineries proved he had a talent and a passion for the work, so he decided to ride his Harley to California to see what the west coast had to offer. Not having much cash in his pocket, he asked his friend Helen if she knew anybody out there. Turns out Helen’s brother Larry lived in Napa Valley, and she told John he could camp in her brother’s yard. If the names “Helen” and “Larry” are ringing bells, it’s because you might recognize their last name: Turley.

Fast forward a couple weeks, and John was in the Napa Valley knocking on Larry’s door. No answer. Not wanting to spend the $2 a night to camp in the State Park (he was down to his last $40 after buying some wine), he decided to set up his tent in Larry’s yard and climbed in with a case of wine.

Larry arrived and was understandably upset that some kid decided his yard was a campground. “Who the hell are you?”

“Well what the hell are you doing on my property?”

“Drinking wine. Want some?” and John held up a glass.

“Well, sure.” As John tells the story, it was a quick matter of time before they polished off the better part of the case, became new best buds, and decided to conquer the world.

John found a job at a small and relatively unknown winery in the Stag’s Leap District called Stag’s Leap Wine Cellars. Working for Warren Warniarski, and under the tutelage of none other than André Tchelistcheff, the first wine that he worked with was the 1973 Stag’s Leap Cabernet Sauvignon … the same wine that would go on to win the Judgement of Paris tasting in 1976 and put the Napa Valley indelibly on the world wine map.

As time went on and John and Larry honed their abilities, they decided to make their own wine on the side. Not a big project, but something just for fun. Larry had room in his barn (located on an old frog farm that sold the critters for thirty cents a dozen to the fancy restaurants of San Francisco), but they needed a name and a label. To reflect the partnership, they combined “frog farm” and “Stag’s Leap” to come up with “Frog’s Leap.””I called up Warren to ask if this was okay,” says John, “and he said ‘This is going to be small thing, right, just a hobby?”

“Of course, Warren, ” said John. Warren signed off on the idea and the name Frog’s Leap was born. Who knew what it was going to become?

Coming next: Part two — the iconic label and early days of organic farming 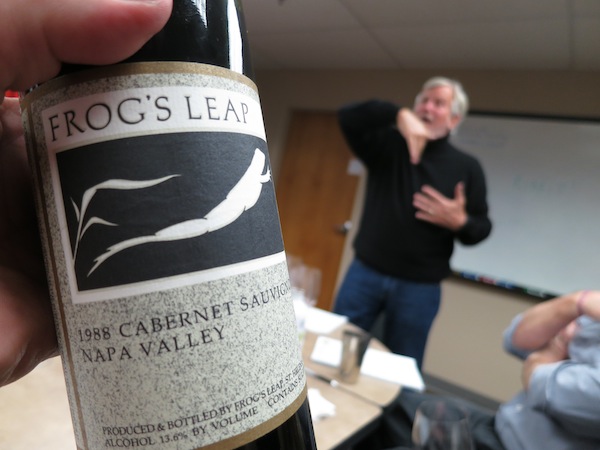