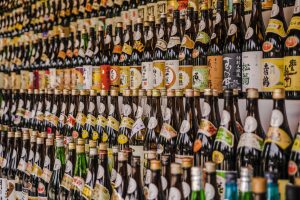 Whether dipping your toe or ready for the deep end, our sake portfolio is open to you. With over 60 bottlings from 16 Kura representing 10 prefectures across Japan, and with 11 varieties brewed in Oregon, THE WINE COMPANY sake portfolio combines the best of World Sake Imports and SAKÉ ONE with a spectrum of styles from Nigori to Junmai Daiginjo, Nama to Genshu, Organic to Vegan in 7 formats – 6 in glass, 1 in can!

What makes some sake better than others? Certainly the attention to detail at the brewery, the type of water they have, the variety of rice, and the mastery of timing. One factor however that remains outside of the brewer’s control is preserving the sake once it is released to the wider world. Between our chosen selections and our efforts to this end, our sake stand head and shoulders above the rest.

All sake at THE WINE COMPANY are shipped under refrigeration from their breweries in Japan or Oregon to Minnesota. As soon as it lands it goes into our large walk-in cooler entirely devoted to sake. Preservation is paramount which is why we exhort everyone we know to do the same so together we can serve all sake as the master sake brewer intended. Another world beckons.

Here are TECH SHEETS on some sake we are proud to represent:

KIBO | Iwate Prefecture
KIBO Junmai Sake -in a can!

Grateful for every sake from these renown sake breweries,
we hope you enjoy them as much as we do.