The World Cup is down to the semifinals. And who are we cheering for at The Wine Company? Since the USA team has been eliminated, we are cheering loudly for Argentina!

Why Argentina? Because while the games are being played we are enjoying Leo Malbec and Leo Malbec Premium, a charity wine project founded by soccer superstar Lionel Messi to support The Messi Foundation.

The Messi Foundation was created in 2007 with a clear directive, directly tied to the history of its legendary founder: all kids deserve the same opportunity to make their dreams come true.

“One day, after a visit to a hospital, I realized the special dimension of a public figure. I understood that to these sick children the presence of a known player can be very helpful. You are there and they smile and for them is a special joy because they are most eager to keep fighting, because they really believe they will outgrow the disease and to pursue their dreams..
I reached my dream of becoming a footballer and I want you to know that I fought hard to get and I have to fight even harder to keep. That effort and that success I want to use it to help children who need it most, because that is what I chose, because I get excited every day that a child smile when he thinks that there is hope, when I see him happy. So we decided to create the Foundation Leo Messi. And I will keep fighting to bring joy to children with the same force and intensity that I need to remain footballer ” — Leo Messi, May 17, 2010 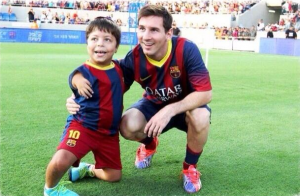 Join us in support of the Messi Foundation by enjoying some Leo Malbec or Leo Malbec premium during World Cup Week (and beyond!).

Leo Malbec is a delicious and jammy wine with a purple-black color at the core, medium bodied richness, yummy spice components, and oodles of blackberry and violet aromas. We’ll be the first to say there’s no shortage of great Malbecs out there, but this one stands above many due to the complexity of the style. Truly delicious wine.

Leo Malbec Premium might be one of the best Argentine wines on the market today. Immense concentration, superb finesse, great richness, and a solid 45 second finish combine for the perfect wine to have with grilled Argentine steak. If you’re a fan of full throttle Napa Valley Cabernet, you will absolutely love this.

The following accounts have purchased Leo Malbec (they are listed alphabetically by city). Call ahead to confirm availability.