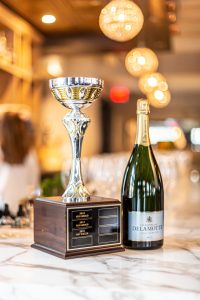 Each year the city gathers at Monello for the annual SOMM SLAM to experience the city’s most talented sommeliers sharing their perspectives on food and wine pairing along with their personal passions, with insights as to how they curate their wine programs.

This is the first time SOMM SLAM has partnered with a distributor and because of this rare ability to plumb our vast portfolio at The Wine Company, which opened onto endless opportunities, this resulted in some of the most competitive voting with no round was decided by more than six votes and one round was as close as two votes -from a pool of 80 voters!

With Jason DeRusha hosting as MC and Monello’s Mike DeCamp and Nick Vasquez creating the delectable food menu, SOMM SLAM proved all the more entertaining for its judges: Stephanie March of MSP Magazine, Jason Kallsen of Twin Cities Wine Education, and the great Nicolas Giraud of the Minikahda Club. Ribbing one another and placing side bets on their own blind tastings, they were a riot not least for Nico continually nailing blind tastings. 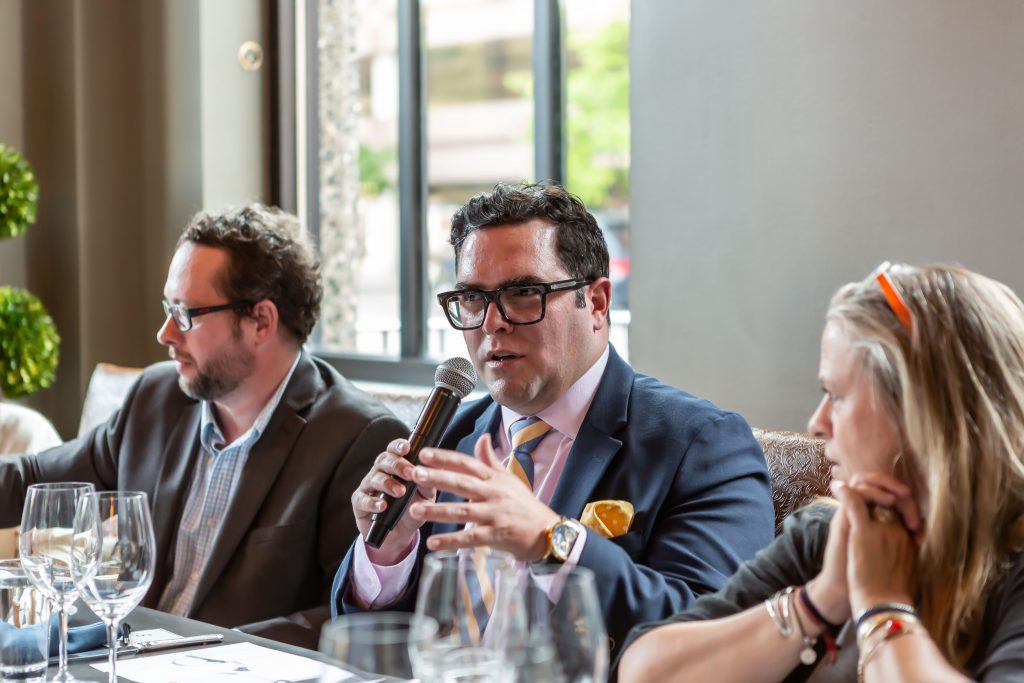 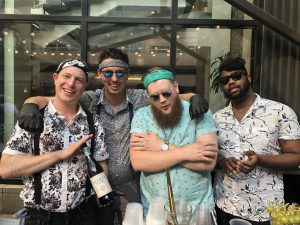 Kicking off with a Sherry Punch competition, the geniuses at Travail teamed up against those at Jester Concepts to win the crowd with their interpretation of the Sherry Punch, a Lustau riff on this classic cocktail on this occasion as a Sherry punch. Both danced on the palate and were absolute works of art but it was Jester’s Sherry Punch that expressed more of the Sherry core ingredient and for this they won out in the end. 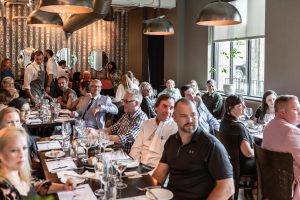 Dinner followed as each dish was met by two wines chosen with the deliberate assiduity unique to our best sommeliers whose palate histories and tasting experience circles the globe and makes our dining scene the award winning marvel we are proud to support by dining out every chance we get. Wines were served blind and the guest and judge votes were tallied after each round. 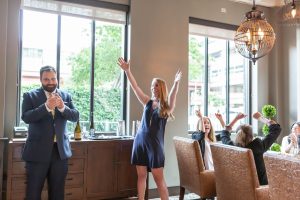 The first course was red snapper, salsa verde, sweety drop peppers, pickled ramps posing a spectrum of challenges to the sommeliers involved. Monello’s Alex White chose the Vecchia Modena Lambrusco by Cleto Chiarli to complement the dish anbd this went beautifully and yet Karina Roe of France 44 had a dynamic trick up her sleeve and the biodynamic Spiegel Erste Lage by Bernhardt Ott with all its mineral verve and classic Grüner Veltliner pepperiness proved the power of the terroir of Austria’s Wagram to win the course pairing. 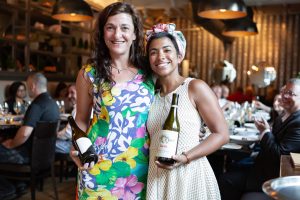 Charred romaine heart, egg yolk pudding, focaccia, and a neonata vinaigrette made the second course. Kathryne Cramer of Borough knocked it out of the park with Peloro Bianco Terre Siciliane by Le Casematte. The Grillo//Carricante blend combined lively citrus with floral scents of chamomile…although it was Grand Café’s Scarlett Carrasco Polanco that won the round with Vietti’s Roero Arneis from 25 year old vines for its floral, citrus, and melon aromas with hints of almond. 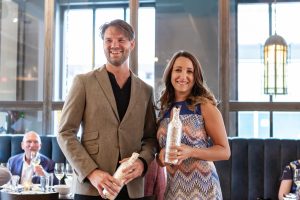 Round III took the crowd by storm as the third course was cecemareti, arugula, Italian XO, and a fried chicken that caused quite the stir across the dining room with wishes the Monello menu might someday include fried chicken -a dish they never serve in the dining room. Ian Lowther kicked off the wine sets with the exceptional Riesling Sekt Brut by Maximin Grünhaus and this single vineyard, traditional method sparkling wine from this storied Ruwer estate was exceptional -perhaps because the dosage is none other than Herrenberg Auslese. Hola Arepa’s Katy Dimick had a strong parry/riposte however and won the third course pairing thanks to a masterful match to Heidi Schröck’s Furmint from Austria’s Burgenland fermented with natural yeasts in Acacia casks. 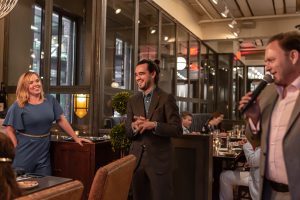 Ribeye, red pesto, and zucchini followed as the fourth and final course but there was a twist to this challenge as the zucchini was not only in sliced form but also as a zucchini bread involving spicy ginger which made for a real wine pairing challenge. Amy Waller of The Bachelor Farmer served forth the resplendent La Massa Toscana from La Massa//Giorgio Primo -a glorious Super Tuscan of Sangiovese, Cabernet Sauvignon, Merlot, and Alicante Bouchet aged in French oak. A dream of rich balance and structure but Tristan Pitre of Demi won this match with help from Rancia Riserva Chianti Classico by Felsina. Made from 100% Sangiovese planted nigh 40 years ago, Rancia is aged 18-20 months in French oak and awash in wild berry fruit, fragrant spices, floral charms and a mineral impression to keep it all aloft. 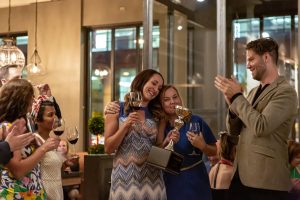 At the end of Round IV, happily sated and excited by all the wine and food, one vote remained: the judges and the crowd had to choose the ultimate sommelier whose wine and food pairing was most complementary. While the whole night was a succession of one compelling pairing after another, the most memorable was Katy Dimick’s not least for how brave it was to put up an Austrian Furmint against so many of the most renowned terroirs but above all that it was not pummeled by the dish; the fried chicken beside it seemed light, nimble, and crisp, and the rich maritime aromas and flavors of the Italian XO sauce simply danced with the wine. In the end all competitors and judges wished each other well, raised a few more glasses of wine and then carried on over cocktails at Constantine -a memorable night of food and wine pairing to be sure! 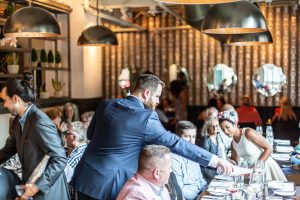 Katy won the day and yet it truly was a win for everyone in attendance to share such a collaborative event surrounding some unbelievably talented people who clearly enjoyed gathering together under one roof. To gather so many together, working toward a common goal, gave each a chance to share their passion with others who love wine as they do and to spark new insights and understandings for everyone present. It was a high time and yet another reason we were so proud to partner with Monello to help bring this altogether. Congratulations to all those immediately involved and to all of us who benefit by the gifted, local food and wine scene that we are so lucky to have on hand every night of the week. Our advice? Book a table, plumb the wine list, and consult the somm to broaden your horizons. 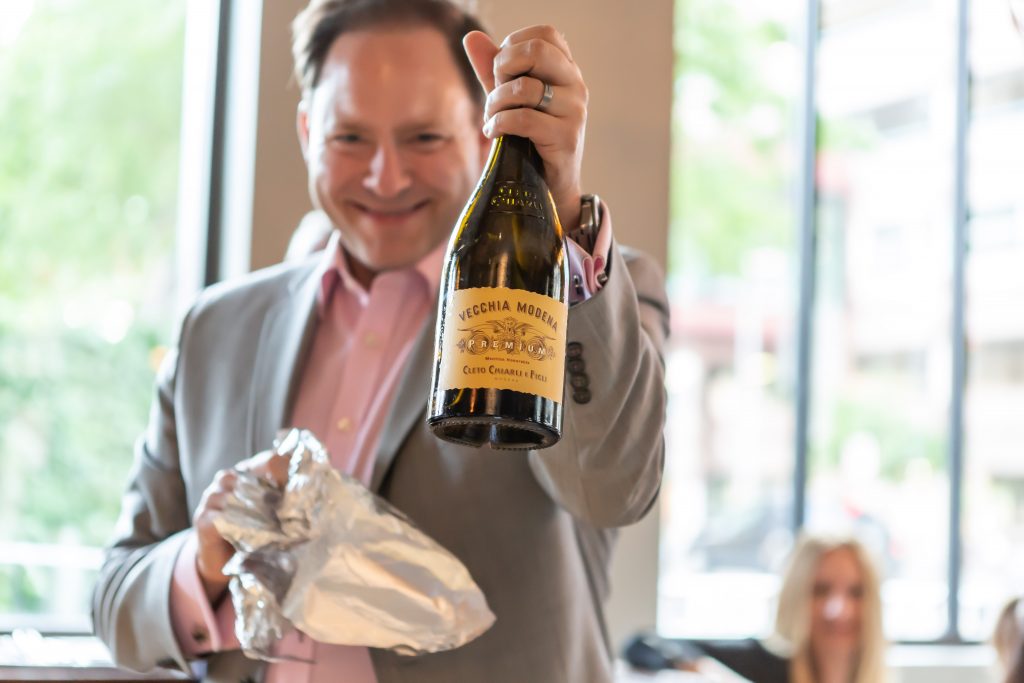