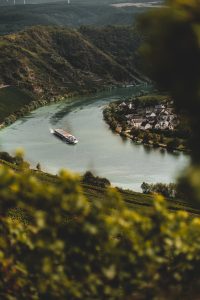 Germany
In what was a trying year for nearly everyone, we were fortunate to find a bright spot in tasting the German 2019s. From the Mosel down through the Pfalz, the general consensus was that 2019 was a spectacular vintage, according to Johannes Selbach, “2019 is an excellent vintage to say it in very plain terms. The last three vintages, 2017, 2018, and now 2019 are a trio of great, albeit different, vintages.” Still, it was not a year without its climactic challenges. The early winter was warm, giving the growers flashbacks to the heat of 2018. However, things changed drastically in spring, with much cooler temperatures and unfortunately, in parts of the Mosel, some frost. The summer brought back high temperatures, with record-breaking heat waves in July that ended with another cold snap in August. Even into harvest, the difficulties did not let up, with rain in September throughout the Nahe and Rheinhessen. These wild fluctuations in temperatures and weather produced grapes with thicker skins, but without expedited maturation or increased sugar levels, providing wines of incredible texture with beautifully preserved acidity. Overall, the vintage was not a simple one to bring home – “a lot of sleepless nights in the cellar and long days in the vineyard at harvest” as one grower put it, but in the end, the juice was indeed worth the squeeze. It was a vintage so outstanding that it led Stuart Pigott of James Suckling to declare “The 2019 vintage is the best vintage I have ever tasted for German riesling in my four-decade career.”

Austria
“In our history, this is the vintage with the least selection work needed. In my eyes, it is a close to perfect vintage. If I could wish to have circumstances for a vintage, it would be like how it was in 2019.” That is how Michael Moosbrugger described the 2019 vintage. While the climatic variations were not as dramatic as we saw in Germany, it was still a rare combination of conditions that produced such an impressive vintage. Similar to our German friends in the west, the end of winter into spring was warm, threatening an early bud break for the vines that was tempered by a moderate April and a surprisingly cool and rainy May. The heat waves that swept across Europe that summer peaked in June in Austria, where temperatures hit over 100 degrees Fahrenheit by the end of the month. Across the country things remained warm and dry for the rest of the summer, though, starting in July, the average temperature continued to drop each month. A bit of rainfall in early September relieved the water stress on the vines and paved the way for a beautiful, long, cool, sunny harvest season. Both Grüner Veltliner and Riesling flourished in 2019, with a harmonious combination of high ripeness, crisp structure, racy acidity, and generous aromatics. The wines from 2019 mirror the growing season, pleasing and balanced upon release without lacking in power or elegance.

Germany
We’ve heard from a number of growers that 2020 was another excellent vintage, if a bit less overt in its ripeness than 2019. Winter in most regions was wet and Spring was very warm, with weather in March precipitating an early flowering. Summer was once again hot and dry and signs pointed to an early harvest. September cooled and sunny days were followed by cool nights. Growers were able to take their time bringing in fruit, which was very healthy.  Must weights are slightly lower than in 2019 and 2018, with great balance between acidity and ripeness. “The balance is excellent and we were able to make a full spectrum of Rieslings and especially outstanding Kabinetts” wrote Johannes Selbach. Crisp and clear, growers described the wines as already showing great potential:  “The harvest continued through until mid-October, and we were able to store a dream vintage in the cellar” said Cornelius Dönnhoff.

Austria
A rather warm winter in the Danube area was followed by a dry, early Spring. Temperatures fluctuated and bud-break was later than average, followed by a very sunny April. Rain returned in May and continued on and off through the summer and into the harvest period. Summer was warm and sometimes humid, with fungal pressure present and attention to preselection was important.  Ripening proceeded slowly and “You had to be patient” remarked more than one grower. Harvest was “up and down”: warm and bright some days to cold and rainy, it was a stop and go. The Covid restrictions on the number of people allowed in one place added logistical challenges to a “hurry up and wait” harvest.  Generally growers have compared 2020 to a cooler vintage, with a smaller total yield. The light and early bottled wines, like Rosé and easy drinking Grüner Veltliner have slightly lower alcohol and are “full of charm with crisp drinkability”.

Care to learn more about Austria and Germany?
Enjoy our little Scout Book primer on these two storied vinelands >>>