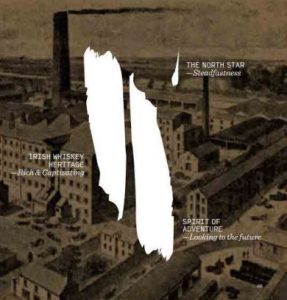 Inspired by the distilleries and merchants of old and the global brands of new Two Stacks Whiskey is a part of a new wave of exciting independent Irish whiskey bottlers. Selecting casks from distilleries across Ireland, Two Stacks is a group of tipplers and enthusiasts at the forefront of Ireland’s latest renaissance in distilling. Bringing Age Old Techniques to Modern Day Whiskey A CONTEMPORARY REVIVAL Blending Ireland’s long and rich history of distilling heritage with modern and new world creatives. Creating an inclusive feeling for whiskey to be enjoyed by everyone. Two Stacks strives for quality over quantity.

Continuing the Story of Irish Whiskey, Bonding & Bottling From it’s origins as uisce beatha, aqua vitae or the water of life, whiskey — legal or otherwise — has always been a part of Irish culture. But before Irish distilling came to be dominated by a few big names, every town would have had its own style and character of whiskey, and the first boom of Irish whiskey in the 1700’s saw blended independent bottling taking pride of place, long before Single Pot Still, Single Malts or Single Grains dominated The Lost Art, Reborn for Contemporary Consumers market.

This independent trade allowed for a world of flavor characters to develop and blossom as bonders used whatever barrels they had to hand. This is the lost flavor of Irish whiskey. The age-old tradition of merchants, grocers & bonders independently blending and bottling whiskey is continued today by a new generation of independent bottles, among which Two Stacks proudly stands.

The Dram in a Can
— A World First

Bringing you Irish Whiskey on the Move!

STRAIGHT FROM THE CASK
The Two Stacks – Dram in a Can is the world’s first 43% whiskey in a 100ml can, serving the same great flavor profile and focus on quality spirit as the rest of Two Stack’s blended range. Perfect for on the move, out with friends, or even just a solo dram in the great outdoors. 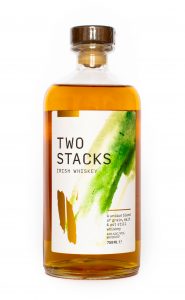 The First of Our Core Range Expressions A sweet and delicate combination of:

ROBUST AND DIVERSE
This easy and approachable whiskey is perfect for drinking on any occasion, enjoy neat, with your favorite mixer or whiskey cocktail. The First Cut —Complex Blend The First Cut is free of coloring and non-chill filtered. Slowly cut and bottled at 43% 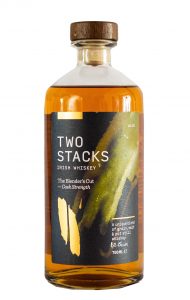 From Cask to Bottle
Taking the same complex five-part blend found in The First Cut and keeping it in all its natural glory.

STRAIGHT FROM THE CASK
Bottled at 64% rich in heavy oils and pot still spice, a true cask strength whiskey to be savored neat or with a drop of still water. The Blender’s Cut is free of coloring and non-chill filtered. Bottled at a cask strength range of 63.5-65.15% – the highest proof Irish whiskey on the market.