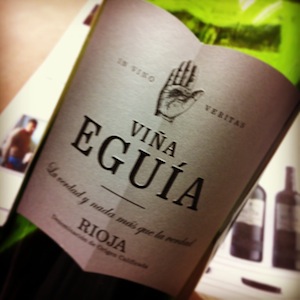 We have recently brought aboard a handful of incredible new Spanish wines into our portfolio. As we explained in a previous post, Spain is a perfect storm of opportunity for wineries to produce amazing value wines perfectly fitted for today’s consumer demands.

One of these new labels is Vina Eguia, from Rioja. As explained on the website of the importer, Quintessential Wines:

The Viña Eguia winery and vineyards were established in 1973 in Elciego and purchased by Father and Son, Jose and Julian Murua of Bodegas Muriel in 2010. Elciego is a town in the Rioja Alavesa, which borders the Spanish “Basque” region, and the language spoken there often includes Basque words, such as “Eguia” which means “truth.” The brand is symbolized by an open hand over the label, which is in the shape of an open book, analogous to putting one’s hand on a bible to swear to the truth of what one is saying.

These wines represent some of the top values we’ve tasted in classically styled Rioja, showing elements of detail and refinement rarely experienced at this price point (under $20 retail).

The 2008 Vina Eguia Crianza is 91 points from The Wine Advocate, which expressed:

The 2008 Vina Eguia Crianza is aged in American oak for 12 months. The nose demands coaxing from the glass, but it eventually offers a crisp, natural bouquet of dark berries, burnt toast and singed leather. The palate is very well-balanced, with lithe tannins that caress the mouth. The oak is seamlessly integrated towards the lingering, supple finish. This is a very well-crafted, natural Rioja. Drink now-2018. 91 points.

And our internal tasting note is equally enthusiastic:

The Tempranillo grape is capable of such elegance and finesse, and at the same time power. It’s the classic “Iron fist in a velvet glove.” The Vina Eguia Crianza 2008 is a true bargain, with classic aromas of black raspberry, worn leather, and clove spices. The look and aromas are decidedly medium bodied, without too much darkness or purple jam coming through (Rioja that is too modern in style hides all the beauty that Tempranillo is capable of). The taste is grand, with grippy acidity on the attack followed by juicy minerality and succulent fruit through a long finish. A touch of dill in the aromas shows the American oak in use, but here is used sparingly and with deft precision. A grand wine, idea for slow roasted meats, poultry, or just a plate of manchego with some jamon on the side. – Wine review by Jason Kallsen, April 2013

The 2007 Reserva is one of the top bargains in Rioja we’ve tried in the past year, again carrying a glowing review from The Wine Advocate, with 92 points:

The 2007 Vina Eguia Reserva is picked from 30-year-old vines in Alavesa and sees 24 months in American oak. It has an attractive, very aromatic bouquet with dried herbs, leather, fennel and a touch of peppermint that is natural and very pure. The palate is very well-balanced with supple tannins, crisp acidity and a refined, mocha-tinged finish that is focused and persistent. This is another superbly crafted Rioja from Eguia.

All of this for an under $20 wine! And our internal tasting note:

The Reserva level of Rioja indicates further aging in not only a cask but also the bottle, helping to develop the aromas and flavors the region is famous for. Fine Reservas have a balance that is only achievable via this aging, which is one of key reasons Rioja constitutes incredible value. This gem has a medium bodied style, with firm black cherry in the initial aromas, along with a touch of christmas pie spice and burnt out campfire (a really nice oak fire, not some nasty pine fire … know what I mean?). The taste is gorgeous. The fruit to acid balance is amazing on this wine, showing an old school mindset meeting a modern facility. Grand grip on the palate, but finishing with a crescendo of acidity, cleaning the palate and getting you ready for more. More of what you ask? Pulled pork, smoked pork, pork chops, pork belly, and of course bacon. – Wine review by Jason Kallsen, April 2013 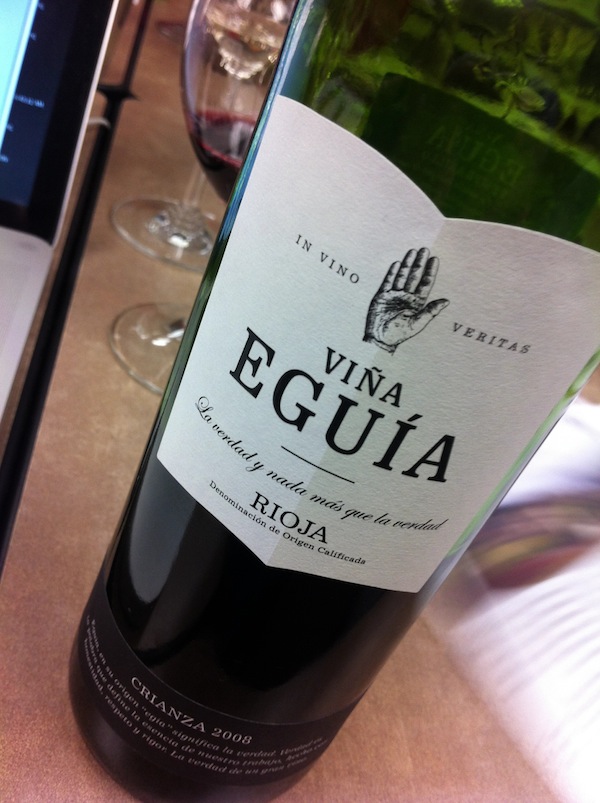 The Vina Eguia Crianza Rioja can be found at the following Minnesota retailers. Accounts are listed alphabetically by city. Please call ahead to confirm availability.

The Vina Eguia Crianza Reserva can be found at the following Minnesota retailers. Accounts are listed alphabetically by city. Please call ahead to confirm availability.