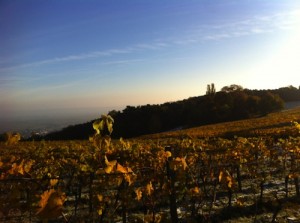 Today’s guest post is from Bill Hooper, former salesman at The Wine Company and now a key man in the wine scene in the Pfalz region of Germany. For those of you that don’t know Bill, he’s a eloquent champion of all things German, but especially Riesling. The guy knows his stuff, no doubt about that.

His current study of vineyard and viticulture science comes through in the article (technical terms, etc.), but it also gives you a clear overview of what is looking to be a classic vintage.

(Highlights added by The Wine Company)

2012 has been an absolutely amazing season. The harvest in the Mittelhaardt is finally winding down after the longest growing season in many years. There are still a few parcels with bunches hanging –mostly in Forst and Wachenheim, but these will likely be harvested next week (with the odd parcel of BA or TBA left to hang, not to mention Eiswein). 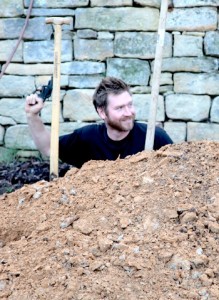 Our man, Bill Hooper, protecting the vines from a flock of German birds.

This week was notable for all of the caravans of tractors and pickers from Bassermann-Jordan, von Buhl, and Bürklin-Wolf driving up and down the Weinstraße from Deidesheim to Wachenheim and back. The leaves on the vines have been showing beautiful shades of red and yellow for a few weeks now, signifying the end of the growing cycle and the completion of physiological ripeness of the fruit.

What sets 2012 apart from other recent vintages is that due to a long, cooler season, this physiological ripeness has been achieved before a significant drop in acidity. We have seen must weights for Riesling in the high 80s, low 90s this week with total acidity in the 10-12 g/l range and pH hovering around 3.0 or 3.1. Numbers of course, don’t tell the whole story, but when coupled with the amazing flavors and aromatic intensity of the grapes that are coming in, we can be reasonably assured of a classic vintage in the making.

Flowering was difficult in the spring for the earlier varieties due to cool weather, but by the time that the Riesling (and Silvaner) got at it, much of that coolness had passed. Hence, we haven’t had the trouble of extremely low yields in the Pfalz that I’ve been hearing about throughout the rest of Europe. Peronospora (Downy Mildew) and Oidium (Powdery Mildew) were only mildly problematic and even then only at the very edge of the forest clearings. Botrytis has been virtually non-existent because of the cool weather and the lack of significant rain. Interestingly (and maybe paradoxically depending on your point of view) the healthiest parcels that I’ve observed have been from Organic and Biodynamic wineries. This can likely be explained by the relatively unproblematic growing season in regard to fungus pressure and the looser, smaller-berried clusters obtained through reduced fertilization, cover-crops between the rows which provide competition for water (instead of open lanes of warmer soil with higher proportions of free-nitrogen to drive the engine of growth) and the added measures of canopy management in many forms that more quality-oriented wineries employ.

Soil also has great influence on botrytis outbreak. On the one hand, sandy soils (which make up a very large percentage of the Mittelhaardt) tend to produce grapes with thinner skins that are more sensitive to Botrytis though the higher drainage properties of sandstone counter the water-uptake of the vine and can prove beneficial in all but the rainiest of seasons. Basalt soil, on the other hand (which makes up a very small percentage of the Pfalz, but is responsible for some of the greatest wines, most notably in Forst) rapidly breaks down into clay. The water and nutrient holding capabilities of clay can help to induce botrytis in wet years. The skins of the grapes may be thicker and the sugar content higher (the black soil retains heat extremely well), but the larger diameter grapes can burst through compaction of the bunches and promote botrytis infection. Muschelkalk, which is found primarily in Dürkheim, Wachenheim, and also in the Südliche Weinstraße, can give a similar outcome, though vines grown on it ripen much later than those from Basalt. Through the luck of the weather this year, none of these soils have been difficult and 2012 has produced the healthiest crop by far that I have seen.

The wildly aromatic varieties such as Muskateller, Gewürztraminer and Scheurebe should be excellent, being much more finely detailed and complex than last year with more acidity (important for Gewürz in particular), but perhaps a little less floral.

Weißburgunder (Pinot Blanc) fared very well. If you found the 2011s a little too fat, 2012 will be back to form with the firm, chewy, mineral-rich texture that the Pfalz is known for (to my preferences the best in the world.)

We picked Silvaner last week and it was the healthiest (ZERO botrytis) harvest that I have ever participated in. A joy to pick. It prompted us to make a small proportion in Amphora –I think the first in the world unless some crazy f’r in Franken is on the case.

Based on talking to others, Spätburgunder (Pinot Noir) will likely mirror 2008 in most regards, which is a good thing as that is the single best vintage of Pfalz Spätburgunder that I’ve ever tasted –aromatically superior, structurally sound and under 14% alc. I don’t currently work with it though, so I will reserve judgment.

As I alluded to, the Riesling is incredible. Having talked with most of the finest producers in the Mittelhaardt, it has become clear to me that we have one of the great vintages of the past 25 years on our hands –a classic. It will be interesting to see how these wines develop through fermentation because the material is phenomenal. Riper than 2008, but not as ripe as 2007 or 2009 and with a few grams more acidity and a month longer hang-time. Exciting!