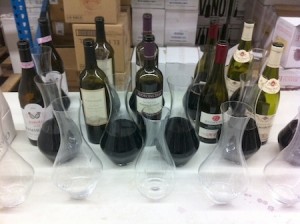 At The Wine Company, we like to challenge assumptions. We’ve done tons of experiments over the years including stemware comparisons, biodynamic and organic blind tastings, temperature control (you don’t want to “shock” a white wine by tossing it in ice), and more. But one experiment we haven’t done is decanting … until yesterday.

“I tend to never decant wines unless I’m trying to keep sediment out of the glass,” said Larry Colbeck (founder and CEO). “I prefer to pour a glass and let it sit, and watch the evolution over the course of the meal.” Around the table there was consensus for this idea, and we agreed that on a personal level we usually don’t decant wines. Joining us for the tasting was Jon Thorson of The Reverse Wine Snob who seconded that opinion.

It’s common to find the statement “decanting wine will make it taste better.” You can find that sentiment echoed in national magazines, top newspapers, and of course tons of wine blogs, but rarely is it truly put to the test. We wanted to do a careful experiment, tasting a range of wines at correct temperature and in correct stemware, to see what happened.

Larry picked six wines for the experiment, and from our temperature controlled warehouse we pulled four bottles of each (except for the Chablis, where we only did two) from the same case/shipment of that wine:

The tasting was scheduled to begin at 4:00 pm, so starting at 1:00 pm we popped the first round of bottles and decanted them. The same process was used at one hour intervals, resulting in three decanters of each wine each one hour apart. The fourth bottle was to be popped at the start of the tasting. The decanted reds were kept in our warehouse and the Chablis was stored in a 45 degree wine refrigerator. 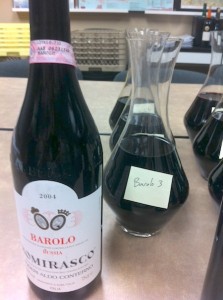 The Discovery of “The Dip”

It’s not often that a group of wine drinkers comes to a consensus, and it’s even more rare for a range of wines such as these to show common patterns. But one thing became clear as we worked through the experiment: at approximately one to two hours many of the wines shut down a bit, only to return at hour three and four. The wines went through a ‘dip’.

Many wines go through a ‘dumb’ stage in their evolution (Pinot Noir is famous for this) where the aromas of a wine suddenly compress or simply become non-existent before re-emerging years later. A great Pinot Noir from Burgundy often has this happen somewhere between 3-6 years of age: drink it before the ‘dumb’ phase or after the ‘dumb’ phase but not in-between (this is a prime example of why a knowledgeable wine merchant is important).

We didn’t expect this to happen in the decanting experiment, but across the board we found the wines decanted for somewhere between one and two hours were lacking. (This was especially prominent in the Pinot Noirs.) It was also proven, a bit into the into the tasting, when the freshly popped bottle was now open for 90 minutes, it shut down (while the two hour decant suddenly re-emerged).

Here is the lineup with tasting notes based on the experiment

Decanted one hour: Lack of minerality, and aromas turned into lemondrop. Aroma profile was ‘thicker’ with less edge to the personality. Still great to drink, no doubt, but not as vibrant as the fresher wine.

Decanted one hour: It’s like listening to good music with the treble and bass turned to negative numbers. Compressed, not showing as much, and even the taste was more linear than expansive.

Decanted two and three hours: The butterfly has emerged from the cocoon. The acidity, the lift, the verve, and goodness are all in full effect. The three hour decant in particular is showing well — all the same elements as the freshly popped bottle but with more breadth.

St. Innocent Justice Vineyard Pinot Noir 2009
Freshly popped: This couldn’t be more different from the Burgundy — loads of concentrated raspberry and black cherry, a mellow earthy streak, and weaving toastiness. On the palate, it zoomed closed and wound up tight. Typical of young, top notch Oregon Pinot it wanted to shake loose a bit.

Decanted one hour: The “wound up-ed ness” has increased, taking the aromas with it. The ‘dip’ is now becoming evident …

Decanted two and three hours: A wine like this, as structured as it is, took longer to unlock than the Burgundy. The three hour decant was singing, adding high tones of herbs and spice to the big waves of raspberry. Typical of St. Innocent, it’s seamless in style and simply damn delicious.

Pedroncelli Cabernet Sauvignon “3 Vineyards” 2009
Through tasting this wine, one thing became clear: this is a helluva drink for the money (around $16 on the shelf). All decanters showed pure black currant and black spice characteristics, with a touch of (pleasant) herbal qualities. Medium bodied in style, with a long finish and solid structure. Very pure Cabernet Sauvignon.

Going from the fresh popped bottle to the three hour (or by that time, almost four hour) decant, was a showing of great evolution and flowering. Where the fresh bottle had all the great characteristics we love in Cabernet, it was tight. By the final decanter it was flashy, sexy, and jammy. For under $20 this was rocking.

The dip was a bit less evident here, but just a bit. There was a toning down of aroma at two hours, no doubt, but the Pinot Noirs showed it more. 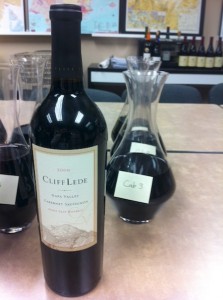 Cliff Lede Cabernet Sauvignon Stag’s Leap District 2009
This is big, serious, solid, wonderful wine that we expected would resist the nuances of decanting. We were wrong.

The freshly popped bottle was overflowing with a cornucopia of raspberry, dried cherry, cedar, and a touch of dill — powerful waves of aroma. The taste was equally prominent, with fine tannins doing their thing against the big fruit. It’s a complete wine from the starting gun (not common with young Stag’s Leap District Cabs).

The evolution in the decanters was fascinating: one hour showed a compression, but not nearly the ‘drop off’ experienced with the Pinot Noirs. As it opened back up the fruit gained complexity while the tannins became more grippy and edgy … an unexpected finding when many sommeliers talk about decanting to “calm the tannins”. Only with the three hour decanting did the tannins get fine again. Across all decanters the aromas were fantastic and impressive.

The Cliff Lede Cabernet decanters were combined at the end of the night and covered. Right now I have a glass of it in front of me, opened for an average of 22 hours. It’s singing: raspberry and clove, mellow spice and fine tannins. “It was the most consistent yesterday and even now tastes the most like it should taste like,” says Nicholas Livingston.

Aldo Conterno Barolo Romirasco Bussia 2004
At $170 a bottle, this is obviously a treat. Great Barolo is known for a sturdy structure while having the complexity that could only be compared to great Burgundy (in fact, Nebbiolo and Pinot Noir are often more similar than different once you take the tannins out of the equation).

A young, freshly popped Barolo, is a tough wine indeed. The tannins are not only firm but push themselves to the front of the line ahead of the fruit. The first glass of the fresh bottle, though smelling delicious and of textbook Barolo (tea leaves, rose petals, dry red fruits, and a touch of roofing tar) had to fight against the tannin.

The dip became evident in the next glass (now open for two hours), where the aromas were stripped of the fruit, leaving the earthiness and roofing tar.

The ones that were open the longest showed what wine drinkers look for not only in Barolo but in the end all wines: balance. The play, or dance, or the dried red fruits to the tannin was complete. It was a bird soaring on a thermal, gracefully and effortlessly bringing forth a sense of place and varietal. Returning to the wine today (open for 22 hours), the dried fruits are most prominent (cranberry in particular), and cedar-meets-tarragon edges have taken the place of the earthiness. It’s still rock solid and will pair nicely with my pizza for lunch!

A concluding thought
Decanting is a moving target, but if the ultimate goal is to show a wine as well as it can be shown, this was a worthwhile experiment. There was a consistent pattern of a loss of complexity at approximately 60-180 minutes depending on the wine. Frustratingly, this is also the average amount of time a great bottle will be decanted for at a fancy restaurant. If you combine this with the fact many restaurants use the wrong stemware for a given wine, it is obvious that many great (and expensive) wines are not being shown at their full potential. This is sad, considering the size of the bill.

Is there a ‘magic formula’? Our conclusion is this: three hours of decanting for many of these red wines will bring out different aromas and taste profiles than a just-opened bottle. Are the wines better? It’s personal opinion, but for us the wines at the three hour point were showing complexity that is just not possible with freshly opened bottles. What to do? Maybe enjoy multiple bottles slowly over the course of a dinner, watching the evolution over the evening.

This is a great experiment to do at home – buy three bottles and pop them in two hour intervals (and be sure to pour it into a glass and just let it sit … simply popping a cork, because there is no air exchange, does very little). Invite some friends over for the experiment, then drink up at the end of the night.

Let us know how it goes!