Thanksgiving can be such a difficult holiday, and we’re not talking just about family members with opposing political and religious views being forced around a table together. We’re talking about a bigger conflict: food and wine.

We’re talking about having a huge variety of deliciousness on the table, including the obscure dishes that great aunt Hazel might bring (green jello, baked beans, green bean casserole, lutefisk cupcakes, “meat spread” — don’t ask, and of course cubes of random cheese served on toothpicks).

What in the world do you pair with this cacophony of flavors?

See, Nouveau is a wimp. It’s a festive wimp, but still a wimp of a wine. It doesn’t have the muscle or the structure to hold up to larger-scaled meals. (Save Nouveau for festive drinking and celebration of the end of harvest season. Raise a glass, drink it fast, and cheer with your friends as you pour more!)

So what to have? Beaujolais, that’s what to have. But rather than Nouveau, enjoy the ‘real deal’ — Cru Beaujolais. You might have read about how we found some great new Cru Beaujolais for our portfolio, so here’s a comprehensive guide for you on the topic.

The Wine Company’s quick and easy guide to Cru Beaujolais,
presented in a question and answer format

What’s the difference between Beaujolais (including Nouveau), Beaujolais Village, and Cru Beaujolais?

Though all are made in the same region (Beaujolais) and made with the same grape (Gamay), there are key differences. Here are the basic definitions:

Basic Beaujolais can come from anywhere within the Beaujolais region and blended into a single wine, which accounts for 56% of the total production of the region. Beaujolais Nouveau accounts for a significant percentage of Beaujolais production and must be fermented quickly and released the same year as the vintage. In the past, that release date was in December, but in 1951 it was moved to the third Thursday of November. Beaujolais Nouveau is festive, fun, gulpable, not ageworthy, and not enormously complex. We like Nouveau for what it is: a reason to gather and enjoy a bottle of wine. Interestingly, none of the grapes used in Nouveau can come from the higher quality “Cru” regions. Almost all basic Beaujolais and Beaujolais Nouveau come from the flat southern half of the area, where there is far more clay in the soil (as opposed to the granite further north).

Beaujolais-Village is the next step up the quality/seriousness ladder. It comes from designated higher quality sub-zones within Beaujolais and can be blended with other “Village level” sources. The Beaujolais-Village production represents 25% of total regional production, and is usually released the March following harvest.

Cru Beaujolais comes from the any of the ten designated “Crus” that make up the northern half of the Beaujolais region. Each has its own personality (detailed below) formed by the terroir of the land. Granite dominates this northern half of Beaujolais AOC, and each of the Crus brings something different to the table. Many Cru Beaujolais, especially from prime vintages, are ageworthy for 5-10 years.

Is the winemaking different between Cru Beaujolais and basic Beaujolais? 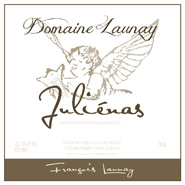 To make basic Beaujolais (including Nouveau) a winemaker relies on carbonic maceration as the fermentation method (including the occasional use of fast-acting yeasts in the case of Nouveau). You can envision carbonic maceration as this: grapes are dumped into a big tank. The weight of the grapes crushes the skins of the bottom of the tank, cracking open the skins, releasing juice, and giving the yeast the sugar it craves. As fermentation starts, the CO2 being released cuts off the oxygen to the grapes above, starting a fermentation inside of the grapes. This results in fruity, fresh, bright, and playful wines … exactly what basic and Nouveau Beaujolais is all about.

But the further north you go, into the Crus, the winemaking takes on a different style, that of Burgundy. Cru Beaujolais at its finest is crushed and vinified much the same way as the best wines of Burgundy: long cool fermentations, aging in oak (often neutral), and lees stirring. All of these techniques are meant to carefully bring out the deep complexity of the wine, allowing a full expression of the grape and the terroir.

So simply in terms of winemaking technique, Cru Beaujolais is a world apart from basic Beaujolais.

Why are the Cru Beaujolais producers so much more like Burgundy producers?

Gamay was a grape planted throughout the revered region of the Cote d’Or, just to the north of Beaujolais, until July of 1395 when the Duke of Burgundy (Phillip the Bold) actually banned it from his region (he was not a fan of Gamay’s “very great and terrible bitterness” and thought it “injurious to the human creature”).

The fans of the grape took their Gamay cuttings and went south, just outside of Phillip the Bold’s region, and replanted. Gamay was better suited for this more southernly spot anyhow: it could achieve full ripeness with just a bit more sunshine.

The ties that Gamay and Cru Beaujolais have to Burgundy don’t end there.  Gamay is actually the prodigal child of Pinot Noir (paired with Gouais Blanc). Therefore, it has many of its parent’s characteristics including an ability to pair with a wide variety of foods.

I’ve heard Cru Beaujolais described as a ‘crossover’ wine. What does that mean?

There are two ways to think of this. For one, there are many white wine drinkers out there who occasionally want something red but shy away from big tannins or full bodied hedonistic fruit bombs. Cru Beaujolais, due to its clean nature and firm acidity, is a great red for those ‘mostly white’ drinkers.

Secondly, it’s a terrific choice for those looking for an ‘old world’ wine to suit a ‘new world’ palate. The punchiness and brightness of Cru Beaujolais makes it approachable and enjoyable for those that often drink California or Australia wines.

In other words, a bottle of Cru Beaujolais on the table makes for a table of happy wine drinkers. Has Cru Beaujolais always been this good? Have I been missing out all these years?

Just as in many European wine regions, a recent wave of ‘cleaner’ winemaking techniques has improved quality and wine stability across the board. This process began in the 1980’s but has really shown its full impact in the last ten years. Newer winemaking technology, better chemistry, and more careful techniques are resulting in far more delicious wines than ever before. This doesn’t mean the wines are ‘modernist’ in any way … ironically, modern techniques have allowed more and more producers to focus on the terroir first and foremost. These are traditional wines from traditional producers, but made in a clean and stable style. So what are the characteristics of each Cru?

Saint Amour – Granite and clay dominate this terroir, along with some schist and limestone. These are spicy wines, often with a warm personality. Beautiful wines to help introduce people to just how good Cru Beaujolais can be. Also, one of the smallest of the Crus.

Julienas – Named after Julius Ceasar, these are richer and spicier wines but with strong floral aromas of peonies and violets, and often with a touch of cinnamon. These are typically the most powerful and muscular wines of Beaujolais, where the combination of sand over granite becomes a natural way to keep the yields low.

Chenas – Only one square mile, the smallest Cru. It used to be a part of Moulin-A-Vent but showed its own unique characteristics and thus became a new AOC. Aromas of wild roses are typical of Chenas, which is an full bodied wine meant for aging. A fine example, stored correctly, will age gracefully for 15 years or more.

Moulin-A-Vent – The soils of the Cru contain manganese, a natural poison for grapevines. The presence of manganese is not big enough to kill the vines, but it does create a situation of tremendously reduced yields, resulting in the longest lasting and ageworthy styles of Cru Beaujolais. It’s also the most likely candidate for oak aging.

Fleurie – Pink granite and thin soils make for light and aromatic wines, stylistically opposite from Moulin-A-Vent and Julienas. Incredibly floral in the nose, but with a supremely velvety texture on the palate, the wines of Fleurie are amazingly easy to pair with a huge variety of foods. Want to try something amazing? A bottle of Fleurie with a curry dish. Seriously.

Chiroubles – The most “Beaujolais” of all the Crus, meaning it makes for wines that are fresh, punchy, bright, and lively. Sandy soil and cooler temperatures lead to this style of wine. Chiroubles is also the highest elevation Cru and one of the smallest.

Morgon – Full bodied and powerful examples of Cru Beaujolais. Low yields naturally because of the iron-oxide and volcanic soils. Many describe the wines of Morgon as ‘meaty’.

Regnie – A particular terroir comprised of one square mile of pink granite soil. When you look down and see that soil, you know you’re in Regnie. Delicate and purfumed wines that show Beaujolais’ close stylistic affinity with Burgundy. These are usually not the best for aging, but Regnie Cru Beaujolais can nonetheless be stunningly detailed. Typical aromas are raspberry and bright cherry.

Brouilly – A wide variety of soils make this a tough area to declare a particular style. Couple that with it being the largest of the Crus, Brouilly can be variable but are often more fruit driven that floral in style.

Cote de Brouilly – The hill of Brouilly, a volcanic slope that is granite, diorite, and schist based in soil. Lots of erosion here, and the poor soils help make for concentrated styles of wine. A good Cote de Brouilly should sit for a few years before drinking. These wines tend to be aromatically lifting but full in mouthfeel at the same time.

OUR LIST OF GREAT CRU BEAUJOLAIS
Accounts listed have purchased these wines in the previous twelve months. Retailers and restaurants are listed alphabetically by city. Of course, call ahead to confirm availability.