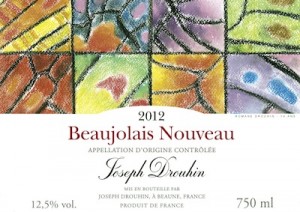 November is upon us, and soon the tsunami of wine known as Beaujolais Nouveau will hit the American shores (we represent the fine selection from Joseph Drouhin — please seek it out!).

As many of you know (or maybe you don’t?), there is far more to Beaujolais than just the November juice we guzzle down with great verve while consuming a roasted bird … and this post is all about the top five things you need to know to be a Beaujolais expert.

1) Get to know the Gamay grape
The Gamay grape is the principal grape of Beaujolais, producing a vast majority of the region’s wines (like 99%). Gamay makes wines that tend to taste fresh, lively, and energetic in its inherent fruitness. It also ripens about two weeks before Pinot Noir, making it a natural choice for those who want more vintage consistency (and less household stress, as you could imagine). Other key characteristics of Gamay include a thinner skin (thus lighter bodied wines in general) and low tannin.

Poor little Gamay has had a tough life. It was kicked out of Burgundy (to the north of Beaujolais) in 1395 by the Duke of Burgundy Philippe the Bold, who declared it “a very bad and disloyal plant.” It found a home a bit further south, where it thrives today.

But Gamay is not the only game in town. A small amount of Pinot Noir, Chardonnay, Aligote, and Pinot Gris are grown on these rolling hills and bottled by specialists. These wines are rare to find in America, but anybody who says “All Beaujolais is only made from Gamay” is wrong (good way to win a bet at a wine bar).

2) Beaujolais Nouveau is relatively “nouveau”
The celebration of another successful harvest has happened every Fall in these parts for centuries, but only in the 1800’s did it include drinking the fresh wine of that year. Starting in the 1960’s this tradition gained in popularity across France and by the 1980’s it became fodder for the marketing machines of larger producers. In 1985, the INAO established the third Thursday of November as the official release date of the wine (a brilliant stroke for promotion). Today, almost 35% of all Beaujolais is harvested and produced as Nouveau.

3) Some Beaujolais is ageworthy
“I’ve had ten year old Beaujolais that is totally good and interesting,” says Wil Bailey. The key, of course, is we are not talking about Nouveau or even standard basic Beaujolais.

Gamay, as a grape, has aging limitations in terms of lower tannin and thin skins. However, a good Gamay grown in the right site has bracing acidity, which has been proven to be a major component in the age-worthiness of wines. The secret? Seek the wines from the best crus. What’s a cru? Glad you asked …

4) Seek out Cru Beaujolais (especially if you love wine with food)
There are ten Crus in Beaujolais … the defined and deliniated regions that provide such distinction they are awarded their own AOC (the French term for a defined agricultural geography). Here are the ten crus with their key characteristics in abbreviated (tweetable) format):

5)  Beaujolais might be one of the greatest food pairing wines ever … if you know the secret
Wine writer Karen Macneil said it best: “Beaujolais is the only white wine that happens to be red.” What did she mean by that? If you treat Beaujolais as you would a white wine, by serving it slightly chilled, you bring out what the wines are famous for: bright acidity. This acidity makes the wine a natural for all sorts of food pairing, from yummy cheese to cured meat to seafood and poultry. But serve it too warm (i.e. room temperature) and you’ll get less acid and fruit, and more alcohol in the aromas.

Coming tomorrow … Bird-dogging in Beaujolais: how we found our latest gems.